The store will not work correctly in the case when cookies are disabled.
Commercial & Industrial Lighting At wholesale rates

We offer many styles of LED wall pack lights, including traditional, cut off, adjustable, and mini wall packs. Choose from our selection below or contact our lighting experts and find the perfect fit for your project.

Down facing wallpacks. Perfect for door ways and walk ways. 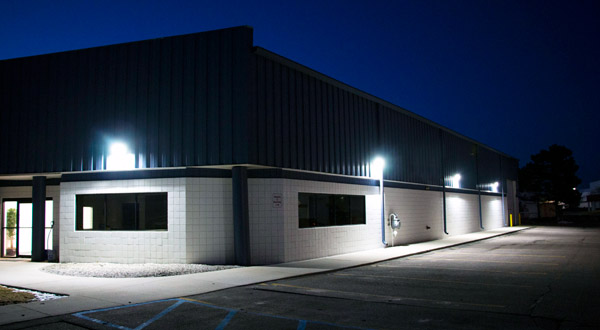 What is a Wall Pack Light?

A wall pack light is a wall mounted lighting fixture which provides illumination and security around the exterior of buildings during evening hours. These lights are commonly used around walkways, back entrances, mandoors, and other areas around building perimeters. Wall packs were traditionally designed as HID and fluorescent fixtures; however, LED wall packs are now available as a more energy efficient and eco-friendly alternative.

The traditional or standard style design of wall packs broadcasts illumination over a wide area. Simply put, these lights are designed to light large areas for perimeter security.

For smaller spaces, full size wall packs are often too large and powerful. In this case, mini wall packs are the best choice as they are designed to be low profile while producing solid lumen output for small areas.

Designed specifically to produce only a downward beam, these wall packs are sleek and purpose built. They are popular choices for applications where appearance is important, especially in sophisticated architectural concepts.

An adjustable wall pack allows you to adjust the lighting toward a specific direction. These fixtures have tilt and hinge sections to allow for optimal aiming of the light output.

Wall pack lights are commonly found on building exteriors to illuminate areas around the perimeter such as walkways, paths, exits, etc. Common uses for LED wall packs include but are not limited to the following,

High voltage LED wall packs are popular for large applications requiring significant illumination, especially when they are mounted from high above. These lights are ideal for multi story buildings with tall exterior walls, as well as large retainer walls and other high structures. These wall packs feature higher powered LED chips with exceptionally robust driver technology, all housed within a durable alloy case and impact resistant lens.

Wall packs are typically installed either via wall mount or junction box. They are hard mounted, meaning they utilize solid fasteners to affix them to their structures. Wiring to the fixture itself is typically through conduit mounted either externally or within the wall or vertical surface itself. It is recommended to work with an experienced electrician during install to ensure that they are mounted correctly and to the relevant building codes. 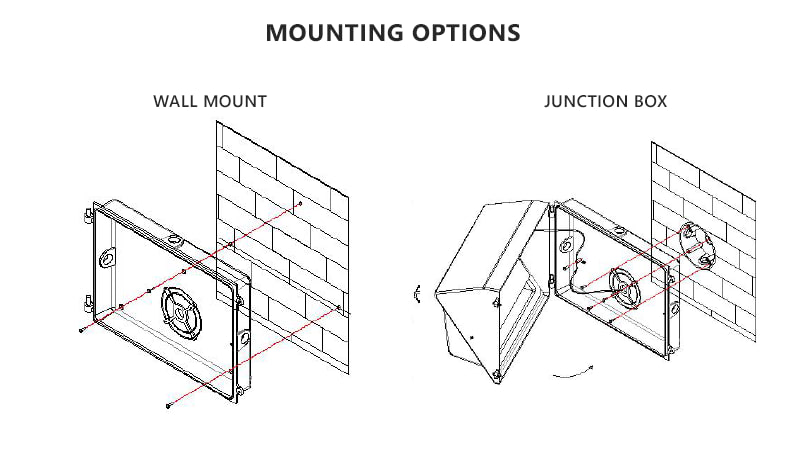 While these fixtures look similar in appearance, they are vastly different in terms of performance and energy efficiency. One of the most apparent differences between these two lights is the actual quality of the light produced itself, with LEDs offering a much higher CRI rating when compared to traditional metal halide technology.

When combined with built in dimming capabilities for custom tailoring lumen output for the specific ambient lighting situation, LED lighting is clearly the superior choice for wall pack lighting applications. UC Davis discusses these benefits in their assessment of their own experience in upgrading to LED wall packs from outdated metal halide tech, stating:

Q. What is a wall pack light?
Wall pack lights are wall mounted outdoor fixtures that provide illumination around building exteriors at night. These fixtures are the most popular outdoor commercial light in the United States.

Q. What is a photocell?
Some LED wall pack lights come with a dusk to dawn photocell. This allows the fixture to automatically switch off during daylight hours in order to maximize energy-efficiency. It’s important to note that not every wall pack comes with a photocell or is photocell compatible so it’s important to check the product descriptions and specifications prior to buying.

Q. What Wattage LED is Equivalent to a 250 W Metal Halide Wall Pack?
While dependent on the manufacturer, in most cases a 250W metal halide wall pack is equivalent to a 100W LED version. While there is a big difference in energy consumption, illumination output is equivalent thanks to the highly efficient technology behind LED fixtures. Also, because LEDs are unidirectional, they can be more efficiently used to direct light instead of requiring extensive reflectors to redirect a metal halide bulb producing a 360° beam pattern.

Q. Where are wall packs used?
These outdoor lighting fixtures are mounted on the walls of building exteriors and used to provide security and illumination around the perimeter. This includes lighting for walkways, alleyways, flagpoles, entrances, exits, mandoors, etc.

Q. Why does my LED wall pack flicker during the day with the dusk to dawn sensor?
Sometimes this can be as simple as a bad photocell sensor, which will switch on and off intermittently. If this happens regardless of ambient lighting, it is more likely that this is actually a bad LED driver and not the sensor itself. Other times, it could be something as simple as a piece of vegetation or something else blocking the proper functioning of the photosensor.